The giraffe is one of the most iconic species of Africa. As the tallest mammal on Earth, these creatures are both weird and wonderful with their long legs and necks, large eyes, long eyelashes, striking coat patterns, ambling gait and calm demeanour.

We also need to reflect on the fact that these gentle giants are in real danger of disappearing from Africa, a problem that needs to be acknowledged and addressed through intensive research, conservation and educational efforts.

Elize Fourie offers us the chance to learn more about this unique species.

What’s in a name?
The scientific name of the giraffe is Giraffa camelopardalis, the species name camelopardalisbeing Latin. Camelopard is an archaic English word for giraffe derived from the Ancient Greek for camel and leopard, animals which the giraffe was thought to resemble.

Not one… but nine subspecies of giraffe in Africa
A less well-known fact about this fascinating animal is that there are nine subspecies of giraffe currently recognised in Africa. These subspecies inhabit different countries across Africa, but increasing genetic evidence suggests that some may not be that different from others, while others may be distinct species in their own right. Research efforts are currently underway to unravel the mystery of giraffe genetics. Each of these subspecies differs in their coat pattern, but also in size. Follow this link for more information on the different subspecies and in which areas of Africa they can be found – Africa’s Giraffe subspecies by the Giraffe Conservation Foundation.

Related to a horse-like animal of the Congo
The giraffe is related to the okapi (Okapia johnstoni), found in the forests of the Democratic Republic of Congo. The okapi has a similar body shape to the giraffe, but a much shorter neck. Okapis, like giraffe, have unusual fur-covered ossicones (horn-like structures), specialised teeth and tongue, and a ruminating four-chambered stomach. Interestingly, only the male okapi has ‘horns’. It has been nicknamed the ‘rainforest zebra’ (or ‘forest giraffe’) because of the black and white stripes on its buttocks and upper legs.

How many giraffe are left in Africa?
Currently, there are fewer than 90 000 giraffe left in Africa. Giraffe numbers have dropped by 40% during recent years and the species is under a lot of pressure. Giraffe are already extinct in at least seven countries in Africa. According to the IUCN Red List giraffe as a species are currently listed as ‘Least Concern’. Two subspecies, the West African giraffe (G.c.peralta; < 400) and Rothschild’s giraffe (G.c.rothschildi; < 1500) are currently listed as ‘Endangered’. The species is threatened by habitat loss, fragmentation and degradation, but also poaching and human encroachment.

A tower of giraffes
The giraffe is a social, group-living animal, with a stationary group called a tower. Giraffe on the move are known as a journey. The giraffe has a fission-fusion type of social system. This means that the composition of the group changes between hours, days and weeks. Usually groups are composed of females (cows) and their young. Males (bulls) are found in bachelor herds and will join the female groups from time to time to seek females in oestrus and to mate with them.

A long, long neck…
One of the distinguishing characteristics of a giraffe is its long neck. However, even with this long neck, the giraffe has the same number of vertebrae in its neck as humans and other mammals. Giraffe have seven cervical vertebrae, but each one can be up to 25 cm long. In addition to its role in assisting in feeding and maximizing vigilance, the neck is also used in an elaborate ritualised fight called ‘necking’, usually only seen in males. They repeatedly swing their neck to deliver powerful head-butts to their rival’s body. 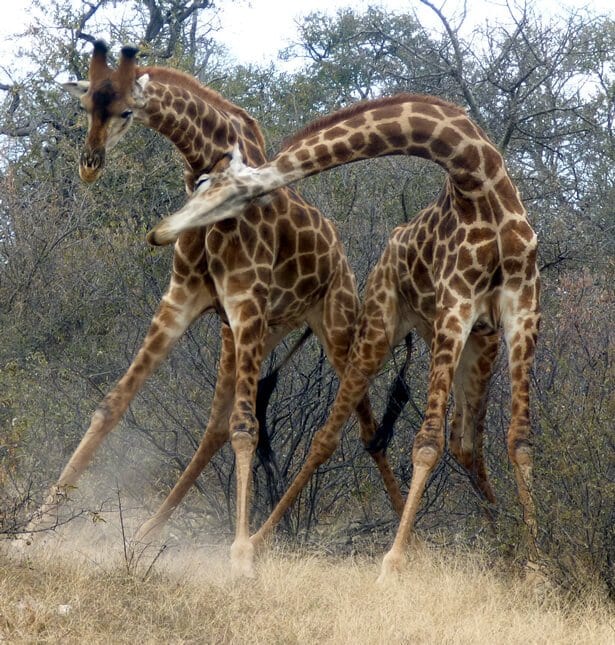 Giraffe horns
Giraffe ‘horns’ are not actually called horns but ‘ossicones’ and both female and male giraffe have them. They are formed from ossified cartilage (tissue) and are covered in skin. Giraffe are born with their ‘horns’, however, they lie flat and are not attached to the skull to avoid injury at birth. They only fuse with the skull later in life. To tell the sexes apart have a look at the ‘horns’. The females’ are thin and tufted while male giraffe normally have thicker ‘horns’ that become bald on top as a result of frequent necking. They add extra weight to the head of male giraffe, which often increases with age, enabling them to deliver ever heavier blows during their necking contests.

A very quick heartbeat
For such a large animal, the giraffe has quite a small heart, weighing only some 11 kilograms (it is about 60 cm in length). The heart beats up to 170 times per minute. They have extremely high blood pressure, twice that found in humans. A giraffe’s heart has to generate almost double the normal blood pressure of other mammals in order to maintain blood flow to the brain against gravity. In the upper neck, a complex pressure-regulation system called the rete miribale prevents excess blood flow to the brain when the giraffe lowers its head to drink.

Giraffe ‘fingerprints’
Just like human fingerprints, no two giraffe have the same coat pattern, and this can be used to distinguish between individuals (and subspecies). Male giraffe also become darker with age. A giraffe’s coat pattern (spots) assists primarily with camouflage, but also with thermoregulation. Underneath each patch (spot) lies a very sophisticated system of blood vessels that assists in regulating body heat. Around each patch is a large blood vessel that branches off into smaller vessels underneath the patch. A giraffe can send blood through these small branches into the middle of the patch in order to release heat; thereby each patch acts as a thermal window to release body heat.

Giraffe are mute… right?
Although generally quiet and non-vocal, giraffe have been heard to communicate using various sounds. During courtship, males emit loud coughs. Females call their young by bellowing. Calves will emit snorts, bleats, mooing and mewing sounds. Giraffe also snore, hiss, moan, grunt and make flute-like sounds and possibly communicate over long distances using infrasound — though this is disputed. At night giraffe appear to hum to each other above the infrasound range – for purposes which are unclear. 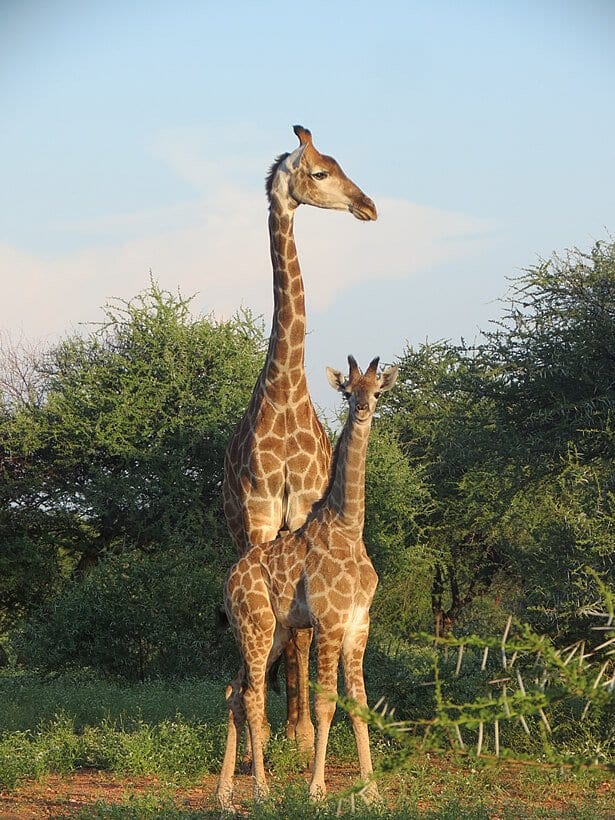 This article has been reposted in partnership with Wilderness Safaris.

Do you dream of seeing giraffes up close? Contact us and we’ll make it happen.