12 Fantastic Wildlife And Adventure Books Every Traveler Should Read

12 Fantastic Wildlife And Adventure Books Every Traveler Should Read

The following books have been chosen by members of the creative team at the Wilderness Safaris office in Johannesburg. And as you’ll see the selection varies with a range of book choices from funny to daring exploits to conservation related stories. We hope you will enjoy! 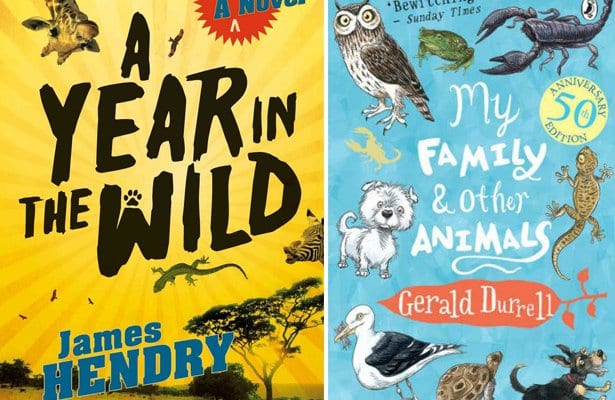 Game ranger extraordinaire, naturalist, muso and the editor of many of Wilderness Safaris’ fabulous video clips, James Hendry has written two light-hearted, and extremely amusing books that should be on every safari enthusiast (and wannabe enthusiast’s) reading list. Set in the fictional Sasekile Private Game Reserve, A Year in the Wild and Back to the Bush: Another Year in the Wild tell various hilarious tales of what really goes on behind the scenes of an upmarket safari lodge; including the interesting and eccentric characters who work there and the fascinating guests who visit the lodge, while weaving in the extraordinary beauty of the African bushveld at the same time.

Gerald Durrell stories – My Family and Other Animals, A Zoo in my Luggage, The Bafut Beagles, etc.
Gerald Durrell

I read these as a youngster and they were wonderful tales of an expat living in different places – some wild, some not so wild – and his experiences or adventures with wildlife, both large and small. They were very personal, funny stories as he had a nutty family and to escape, he absorbed himself in the world of insects, birds, animals, etc.

I bought this book after Peter did a talk for Children in the Wilderness and it lay next to my bed for some time before I picked it up. As soon as I started reading it I was drawn in and intrigued by the clear determination of this adventurer. The book tells the story of two of his adventures (rowing across the Atlantic single-handed and his trek to the South Pole) and the challenges faced and lessons learnt along the way. Both of these adventures were extreme and tested Peter’s limits. His perseverance is truly inspiring.

While I would never climb Everest myself (I think mountain climbers of this sort are a tad crazy), I found this tale of the disastrous 1996 expedition fascinating. One can only admire the dedication and focus of those who make this kind of commitment when it comes to fitness, time, money, personal and health challenges. The incredible feeling of success if you reach the pinnacle and the absolute devastation when it goes badly wrong are feelings I can only imagine.

In a similar vein was the story of Alison Hargreaves, first woman to scale the planet’s two highest peaks without supplemental oxygen. She made it to the summit of K2 but never made it down.

The blurb of the book says, “They show us a woman who found freedom and fulfillment on the steep faces of some of the world’s most forbidding mountains, a wife trapped in an increasingly troubled marriage, and a mother who sought literally to climb her way to financial security – a desperate gamble for which she would ultimately pay with her life.” And I think again, as with the previous book, I have to admire those who are willing to sacrifice all to take on the elements and Mother Nature at her best, and worst. 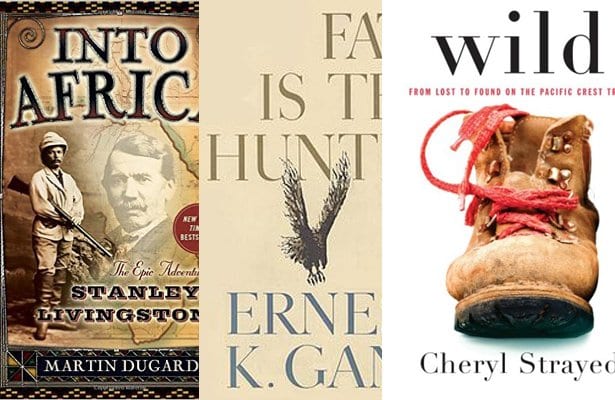 I have always been interested in the stories of the great explorers and have read numerous books on the topic. This one still remains as one of my favorites. A fantastic book about the true story of Stanley and Livingstone, their challenges, adventures and travels over many years.

A truly riveting book which is well researched and provides many interesting twists and turns and insights into all the characters. For those interested in the great African explorers two other great reads include: Daniel LIEBOWITZ & Charlie PEARSON’s The Last Expedition: Stanley’s Fatal Journey through the Congo and Tim Jeal’s excellent book about all the various explorers of the Nile – Explorers of the Nile: The Triumph and Tragedy of a great Victorian Adventure. Both captivating, fascinating reads.

Gann was a pilot in the early days of commercial airlines, and his uncanny ability to emerge unscathed from storms, mechanical failures and the economic vagaries of an industry in its uncertain infancy is matched only by his flair as a writer. His words alternately soar, swoop or sputter as the less than reliable aircraft of the 30s, 40s and 50s somehow keep him aloft. Covering the emotional horizon from comic to tragic, this is a book for anyone who has ever flown anywhere in a small plane and who understands that the journey can be as much a part of the adventure as the destination. From the steamy jungles of Brazil to the fjords of Iceland, Gann somehow evades the myriad perils which thin the ranks of his peers – and passengers. His descriptions will thrill anyone who can picture their armchair as a cockpit, and yearns to take flight armed with only a teacup as protection against storms, a biscuit with which to shield themselves from the tropical sun, and a cushion to swat away the hailstones.

This is a personal favorite of mine – maybe because it’s a book that so many people can relate to in some way. At twenty-six Cheryl Strayed makes a big life decision influenced by her crumbling marriage and the loss of her beloved mother to cancer. Her decision: to walk eleven hundred miles of the west coast of America on the Pacific Crest Trail on a solo three-month hike. “I was entering. I was leaving. California streamed behind me like a long silk veil. I didn’t feel like a big fat idiot anymore. And I didn’t feel like a hard-ass Amazonian queen. I felt fierce and humble and gathered up inside…” 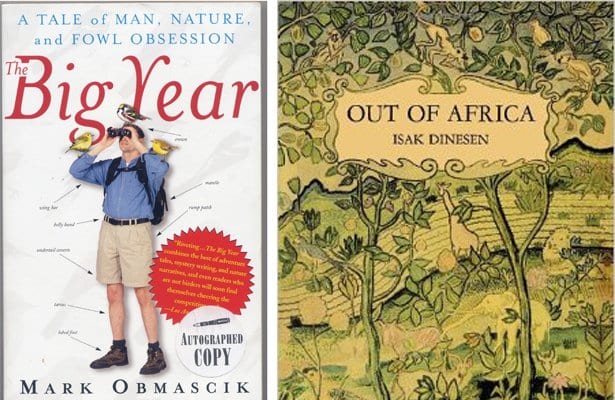 The Big Year: A Tale of Man, Nature, and Fowl Obsession
Mark Obmascik

Every year a bunch of avid birders set out to see how many bird species they can tick off in a single year. Each person hopes to achieve the highest number of sightings and will go to any length to try secure that they see the most birds – even travelling to far off places to try capture a lifer (a first time sighting) to increase their chances of winning! In his book Mark Obmascik shares the story of perhaps the greatest birding competition of all time – the 1998 North American Big Year – taking readers on a riveting ride exploring the lives of three Big Year competitors. Each participant, while very different in their lifestyles, shares the same burning passion for birding – one that you can easily relate to if you are an avian fan or enjoy sighting birds on your safaris or at home…

This autobiography is an honest account of an unconventional Danish woman and her life on her farm in Kenya between 1914 and 1931. Her remarkable love for this unforgiving country is captured beautifully in her prose. What affected me the most was her sad and permanent departure from the continent having struggled to keep the farm afloat for 17 years. The final paragraph always gets to me… “From there, the south-west, I saw the Ngong Hills…The outline of the mountain was slowly smoothed and leveled out by the hand of distance.” 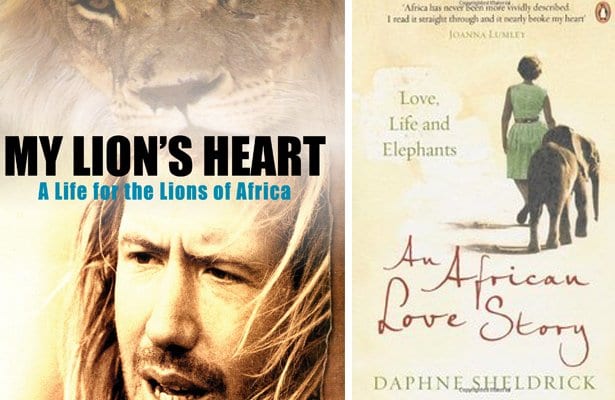 My Lion’s Heart: A life for the Lions of Africa
Gareth Patterson

This book is Gareth Patterson’s autobiography – his journey from his early days as a guide in South Africa and Botswana to working with George Adamson and the many people and animals that have shaped his life story. His account details the hardships and triumphs of working in the wild and includes many interesting insights into lion behavior written from personal observations. I also enjoyed Gareth’s book – The Secret Elephants – about his seven-year exploration of the Knysna forests. His study on the elephants and his findings are fascinating.

Dame Daphne Sheldrick’s memoir tells of her incredible journey growing up in Kenya and her life’s work and dedication to protecting Kenya’s elephants… Her story centers on her relationship with David Sheldrick, the famous Tsavo National Park warden, whose death inspired the David Sheldrick Wildlife Trust and orphans’ nursery. A read that will inspire you and one that reaffirms the remarkable nature of elephants and the important role that we need to play in order to protect them.

This blog has been reposted in partnership with Wilderness Safaris. Feeling inspired? Reach out to our team and let us help you plan your next trip!