Choosing the Right Spot for Your Zanzibar Island Break

Choosing the Right Spot for Your Zanzibar Island Break

There are so many choices of hotels and resorts in Zanzibar, and choosing the right one for you, can be a little daunting! To help us guide you, paint a picture of the image you have in your mind, of the perfect setting for your island break. Are you more interested in the history and culture of Zanzibar, and less interested in a beach resort? Are you looking for lavish luxury or a comfortable oasis? Do you want direct beach access or are you OK with lounging by the pool? Do you want a private retreat, or a more social atmosphere? Do you prefer all-inclusive resorts?

Our private travel designer Susan Neva recently experienced a few properties in Zanzibar, all offering completely different comfort levels. Hopefully her experience will help you paint your own picture on where to stay in Zanzibar. 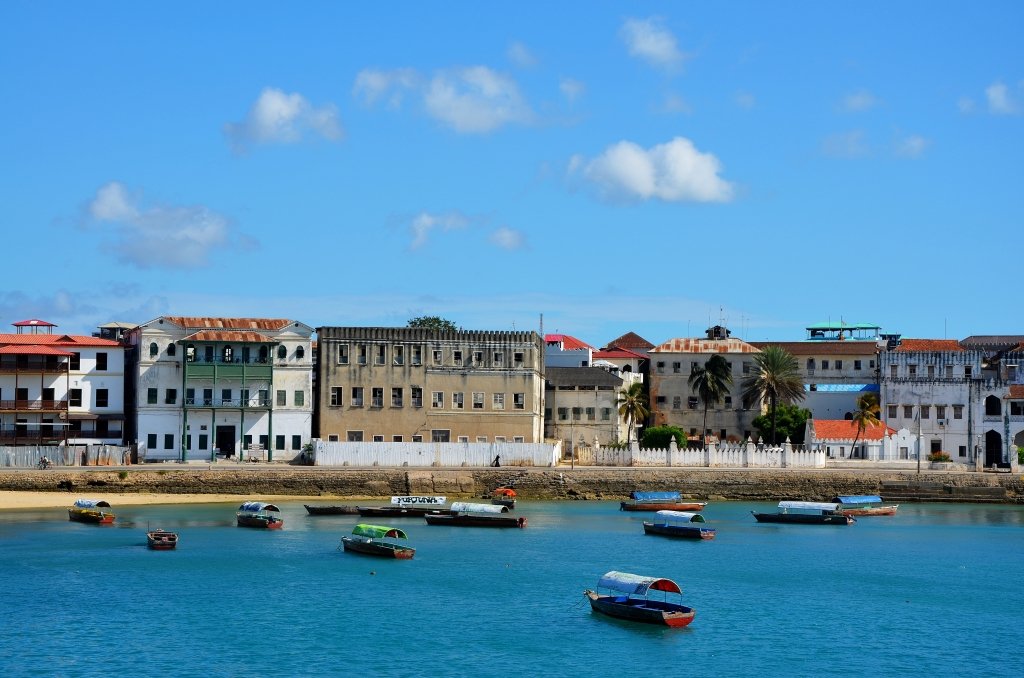 It was hot and sticky as we landed in Zanzibar (Jun 2019). That is not a complaint…. I feel comforted by the heat. Non-passengers are not allowed inside the small “Arrivals Hall”, so, after collecting your baggage, you have to exit the building to look for your welcoming party. The ride to our hotel in Stone Town was about 20 minutes, along busy streets, lined with small shops and roadside merchants selling everything you might possibly need! Our friendly guide was eager to share his plans for the Eid celebration happening later that evening and tomorrow, marking the end of Ramadan and the month-long fasting.

Clean lines, cool marble, and elegance greeted us at the Park Hyatt, overlooking the ocean in front of the hotel, and the hive of activity with ferries, freightliners, and traditional dhows dotting the water. The bar is lit up by bright sunshine streaming through the large, ornately decorated, windows, and a cool respite from the thick, warm air outside. Lush comfort awaits in the elegantly furnished rooms either overlooking the ocean or Stone Town. If you wish to explore the ancient architecture, and culturally immerse yourself into the history of Zanzibar, Park Hyatt is definitely one of the most luxurious properties in Stone Town.

Time to hit the beach! I eagerly climbed into my waiting van, and we pulled into traffic, only to find ourselves at a standstill. Traffic was chock-a-block, due to the fact that a large passenger ferry had just arrived from Dar Es Salaam, carrying local people returning home or visiting family for the Eid celebration! The atmosphere was alive with excitement, as people visited the markets for some last-minute shopping to prepare for the feast. Women and children were dressed in their best, adorning bright colors – sequins and detail glimmering in the sunlight. 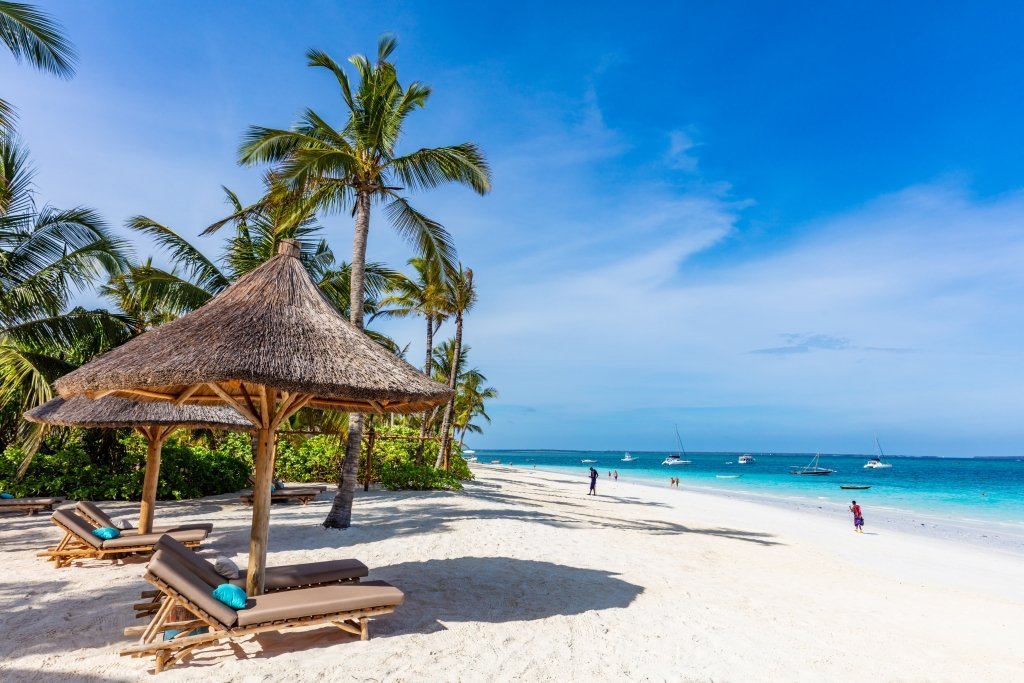 What would’ve taken about an hour and 15 minutes to the village of Kendwa on the northeast coast of Zanzibar, took us almost 3 hours, after being held captive in the streets of Stone Town for so long! The main roads between towns is well-paved for the most part. Chinese-owned companies are working to fix the roads that are not. Once you exit the main highway, the dirt roads through the villages are pitted with holes from the recent rains. However, I was told that they would be graded to smooth them out for the peak season.

Arriving at Kilindi, was a welcome retreat from the busy streets of Stone Town. As with African hospitality, I was greeted with a cold towel and refreshing fruit juice. I was escorted down several steps, through lush gardens to the main area, however, was told that there is a driveway down, for those who can’t manage so many steps. To describe Kilindi in one word? Zen! The cool and open dining/bar area, with a waterfall as the backdrop, overlooks the inviting pool. I was introduced to my butler who showed me to my villa – one of 15 villas in this intimate setting. I was blown away as I passed through the wooden door that revealed the private lush gardens and open-concept villa. To the right, an open veranda with day beds and table and chairs for private dining, opened up to a plunge pool flanked by more lush gardens, with enough break in the foliage to expose the ocean beyond. Up a flight of steps and I was in the cool bedroom with large shutters which open up to a second plunge pool. Up another flight of steps to a spacious, open-air bathroom with views of the ocean, now at low tide and turning orange and pink with the glow of the sunset. I chose to dine in the main area of the lodge and was treated to an incredibly delicious meal of fresh fish in a candlelit setting with soft music playing in the background.

Eager to get up before sunrise, I headed down to the beach, where sun-loungers and umbrellas adorn the white sand, and kayaks and paddleboards stand at attention, waiting for guests to venture out. I wanted to check out Kendwa village, which supposedly is alive with holiday makers during the peak season. I gingerly stepped over tethers, anchoring the dhow fishing boats to the beach, as fisherman were laying out their nets after returning with the catch of the day. Walking along the white sand beach, as the gentle waves lapped at my feet, I approached the expansive, main beach area of Kendwa, lined with small shacks (which I assumed were souvenir shops), watersports centers, open-air restaurants, and more hotels and villas. I could only imagine how this place comes alive in the busy season, so for someone who would like the option to join a lively atmosphere, but return to the respite of a secluded, intimate villa, Kilindi is an incredible choice!

After a delectable breakfast on my private verandah, of eggs benedict, recommended by the chef, I continued on my way to Zuri Zanzibar, located about 5 minutes from Kilindi. It wasn’t until I reached there, that I realized I had literally walked along the beach in front of it during my morning exploration. Zuri Zanzibar opened last year. 55 bungalows set in gardens, some with full ocean view, some with partial, and some with garden views. The rooms are of a cozy, standard size, with all the comfortable amenities, including both indoor and outdoor showers, and a small deck from which to enjoy the views. Family villas are two side-by-side suites interlinked by a common living area and with a private plunge pool. Suites are the same, with the 2nd room a living area, rather than a bedroom. Suites and villas have access to a private beach, while standard rooms only have access to the public beach in front of the hotel. The hotel does offer loungers and umbrellas for guests. The hotel has a couple of restaurants and bars dotted around the property, a spa and open-air gym, and a little spice garden where they offer cooking classes for $65 a person. You also have access to other restaurants on the Kendwa beach in front of the hotel. 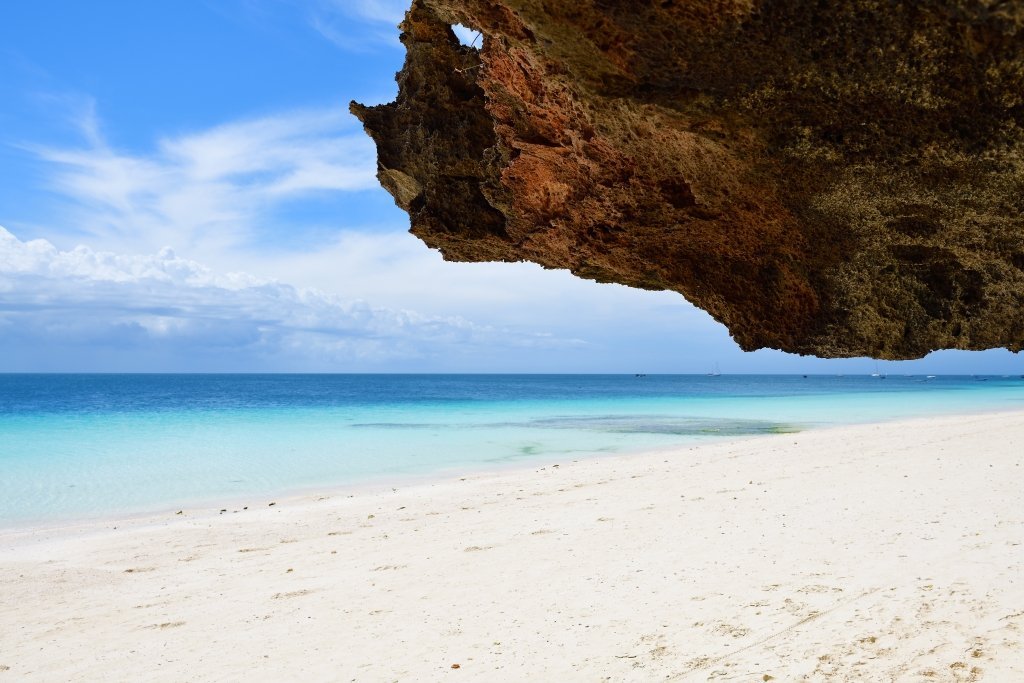 Next stop, Essque Zalu, which was only about 10-15 minutes from Zuri Zanzibar. After the luxury and intimacy of Kilindi, it was difficult to adjust to this much larger hotel. With 40 rooms and 8 x 3-4-bedroom residences, it felt much larger than the nearby Zuri Zanzibar since rooms are close together. I was in the garden section, which is a ring of bungalows (Garden Suite on the lower level and Superior Garden Suite on the upper level) toward the back of the property. There are limited Seafront Suites right on the rock cliff overlooking the ocean. The Ocean Suites are behind the Seafront Suites (see map). The large pool sits in the center of everything, so whether you’re going to the restaurant, the bar, the beach, the pier, you have to pass by the pool which is lined with loungers. The narrow beach is only available at low tide. I was able to walk in both directions for a considerable distance. In the evening, they set up a BBQ by the pool, with long tables laden with everything you could think of! The food was tasty and nicely presented. There was live music which made an enjoyable evening. Drinks were expensive! I paid $24 for 2 glasses of wine! If you are looking for a hotel with a bit of a vibe, at a reasonable cost, and OK with no beach for part of the day, and a pool as the central attraction, this one is fine. 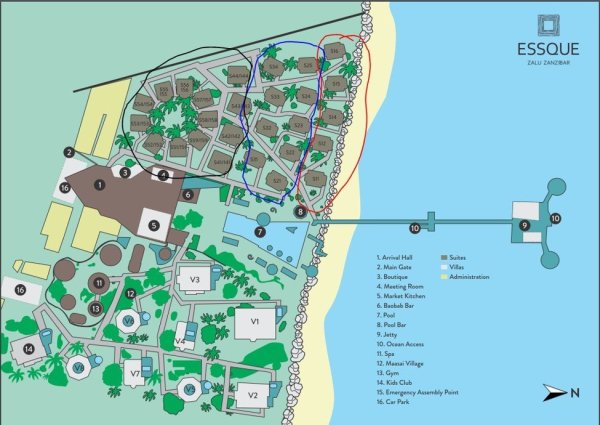 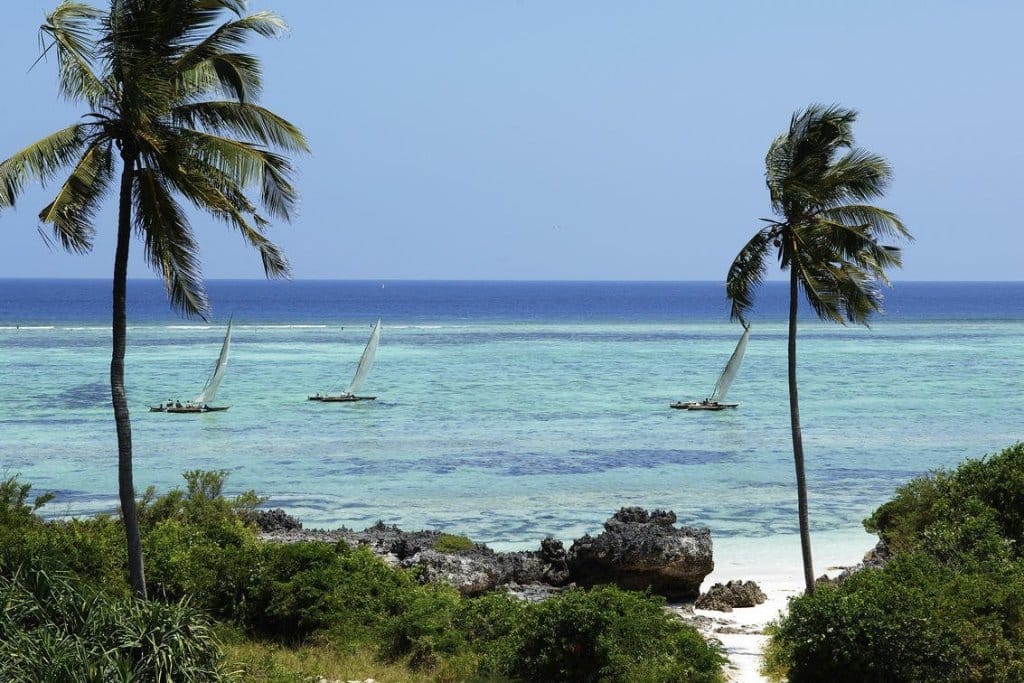 Headed to the north eastern side of the island to visit Matemwe, it is less populated along this drive, with more farming communities. Matemwe is barefoot luxury – more my style! At the main lodge, there are 3 types of rooms that line the waterfront: Standard suite, with king size bed, bathroom with bath and shower, patio with hammock and seating; Standard suite with plunge pool – there are two of them; Suite with Mezzanine – same size room, but with an additional loft on the upper level with twin beds – great for families with kids, or even 4 adults if they don’t mind two sharing the king bed and two climbing the stairs to the loft? Only one bathroom though. Meals were either served by the pool or in the dining area, both overlooking the ocean. Food was excellent. Staff was accommodating. Since all of the villas spread out from the dining area along the oceanfront, further rooms have a little distance to walk. Felt good to walk off all the food from the last two weeks, but something to bear in mind for those who have difficulty walking – request a room closer.

Matemwe Retreat is a little more lavish and private, ornately decorated, with the bedroom and bathroom, as well as dining area and patio on the lower level, and the plunge pool/patio on the upper level. The tiny spiral stairs leading to the upper deck are a little treacherous, so not great for those unsteady on their feet, but it opens up to an expansive patio with gorgeous views! Meals can be taken privately in the villa or if you prefer, at the Main Lodge. The 4 villas at Matemwe Retreat are located at the furthest end of the suites of the Main Lodge, however, have a private entrance.

Matemwe Beach House is located right off the expansive white beach, reached by a little pathway, and hidden in the trees for privacy. It consists of two double rooms downstairs (one bathroom en suite) and one other), and a loft room up some steep stairs with twin beds – ideal for children (no en suite bathroom). There is a living area/dining area where private meals are served, and a deck with plunge pool. I would not consider this a luxury property, but nice for a family of 6 looking for a little privacy and flexibility – the beach is right there, the Watersports Center for snorkeling, diving, fishing, kayaking, reef walks (low tide)…

I was fortunate to enjoy a snorkeling trip on the Mnemba reef. Small speedboats complete with towels, fins, snorkel, reef shoes, water, snacks, and a waterproof bag for your belongings, take you out to the Mnemba reef right off Mnemba Island (can’t land on the island). Apparently, all of the snorkeling trips come here, even from Nungwi where I had stayed the night before. Aside from an array of beautifully colored fish seen underwater, we saw dolphins which were a little shy and did not come close to our boat. I’m glad I did it!

Reach out to the Alluring Africa team to plan your Zanzibar beach getaway.