The Hollywood image of a sailor struggling ashore through the waves onto a palm-fringed desert island beach is almost a cliché, but spare a thought for the many unfortunate mariners who found themselves washed onto Namibia’s beautiful yet forbidding Skeleton Coast. If its reputation did not fill them with a sense of foreboding, a glance around them soon would: behind them, the cold crashing waves of the South Atlantic; ahead of them, hundreds of miles of parched desert; and scattered all around, the bleached white bones of whales and seals – and more than a few humans – that give this coastline its name.

This thousand-mile long swathe of sand runs from the Kunene River on the border with Angola, down to the Swakop River in the south. It has been notorious for centuries – the local bushman called this “the land that God made in anger” and Portuguese sailors, who were the first Europeans to see it (although not all lived to tell the tale) referred to it in hushed tones as “the gates of hell.”

A unique combination of the cold Benguela current meeting hot desert winds, combines to make this one of the foggiest places on earth. Add in lots of underwater rocks and sand bars, and you have a recipe for maritime disaster. The mists of course give life to this coastline – in the almost total absence of rainfall, they bring essential moisture – but they have also spelled doom for hundreds of ships of all kinds, from wooden treasure ships to modern day trawlers.

The fascinating history and surprisingly rich wildlife of the Skeleton Coast attracts intrepid tourists, but as you explore, listen carefully – what you thought was the cry of a lonely seagull, may just have been the wail of a ghostly shipwreck victim.

Here are five of the spookiest shipwreck tales – and we’ve seen the iron skeletons of these ships poking out of the sand, so we know they’re true.

One of the most recent wrecks, Zeila is the most intact. Whilst being towed to India in 2008 to be broken up for scrap, this trawler slipped her tow rope and grounded herself. She’s one of the most photographed of all the shipwrecks, since she lies in the surf close to Henties Bay, which is a favorite fishing spot. The Zeila herself has become a preferred perch for local cormorants!

The Natal Coast was wrecked in 1955, close to Swakopmund. The town’s famous red and white striped lighthouse couldn’t save her, nor her cargo of coconuts. These were considered a luxury at the time, and since they can survive floating at sea for some time, (this is how coconut trees spread) they fared better than the ship, of which very little is now left.

The Otavi is perhaps one of the most eerie wrecks of all, a rusty orange hulk sitting upright on the beach in Spencer Bay. As with all these wrecks, she is slowly corroding away as the salt spray eats at her ironwork, but she’s likely to still be around for a few years yet. Her cargo was guano, and ironically enough she has probably had more seabird droppings land on her since she ran aground, than she was carrying on that fateful day in 1945. 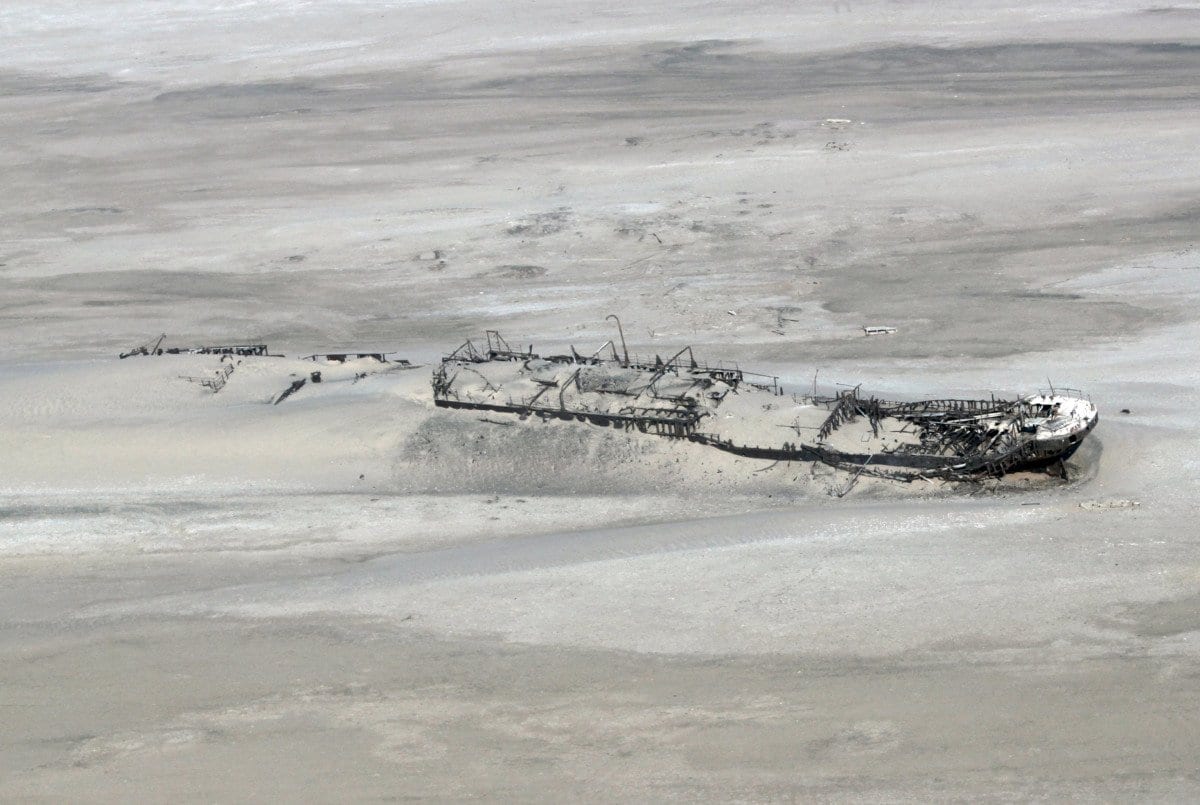 This famous shipwreck happened in 1909 and is notable for the fact that today, she lies several hundred yards from the waves. As the advancing dunes have pushed into the sea, the Eduard Bohlen has embarked on one final journey, moving slowly inland. Everyone on board survived this mishap, and the ship was intact enough to be used as accommodation by diamond miners from nearby Conception Bay. When the diamonds began to run out, and mining lost its sparkle, the Eduard Bohlen was abandoned all over again, and today is being slowly overcome by sand – visit while you can still see her!

This trusty freighter had survived the perilous Malta convoys during WWII, but had no answer to the dangers of the Skeleton Coast. When she ran aground in November 1942, she was able to send out a distress signal that prompted one of the most remarkable and lengthy rescue missions ever undertaken.

The ship’s lifeboat transferred some of the passengers and crew to the beach, before becoming stranded in turn – leaving around 40 people on the wreck. Through determination and bravery, most of these were rescued by sailors from other ships, including a tug from Walvis Bay which was also subsequently claimed by the Skeleton Coast. The first aircraft with supplies to reach the area landed on what appeared to be a firm beach, but which was only a salt pan covered with sand. The weight of the plane broke the crust, and its wheels became bogged down.

Other aircraft were able to drop supplies to keep the survivors alive until a convoy of trucks from Windhoek reached them. In the meantime, a brave sailor had swum ashore from another rescue ship with a line around his waist, to help several of them off the beach.

The plane was eventually dug out – only to crash into the sea on the return flight. Meanwhile, the land convoy made it back to Windhoek just in time for Christmas. With impressive stoicism, the passengers then completed their original journey to Cape Town by train. These days, of course, it’s a rather less perilous undertaking.

The spooky curse of the Dunedin Star caught up with several of her crew, who were lost at sea on other shipwrecks over the next few years.

Today, the eerie shipwrecks of the Skeleton Coast have found a new role as artificial reefs. As they are reclaimed by Nature, new life springs from old tragedies. In many ways, that’s the story of the Skeleton Coast – an unforgiving environment that supports an amazing variety of life, all of it eking out an existence in the most unlikely of surroundings.

This is perhaps best symbolized by the “living stones” or lithops – tiny pebble-like plants that occasionally burst into flower. Perhaps they gave a glimmer of hope to the stranded sailors of days gone by? Certainly they contribute to making the Skeleton Coast unbelievably photogenic: the greatest risk in visiting this area today, is running out of space on your camera!

Visit Namibia’s Skeleton Coast and see these eerie shipwrecks up close. Contact our team and we’d be happy to help you plan or answer any questions about Namibia.